So far, what happened?

Apple launched the ATT feature with the IOS 14.5 update. To wrap up the situation for newcomers, we can list the main points in bullet points: 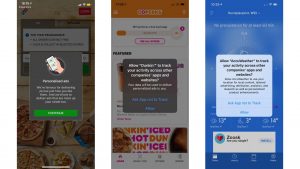 From Apple, SVP Software Engineering Craig Federighi spoke to the Wall Street Journal. He mostly mentioned that they believe they are doing the right thing for the users by supplying them with a safer environment.

“App Tracking Transparency gives users the choice of whether they want to be tracked across apps and websites.“

If you want to check the details about the ATT & the opposition opinion, you can check our previous weekly news blog. This week’s topic is how the users reacted & what will happen now.

How is the situation from the Apple Users’ Side 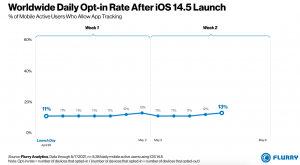 As you can see above, the number of opt-in rates for 14.5 iOS 14.5 decreases day by day. In other words,  the percentage of users who let apps track is something you shouldn’t ignore. Those people’s data can still be worked on and give a good impression.

At the same time, based on the chart below, the number of active users who prefer not to be tracked is approximately 3%. Since 14.5 has just launched. ATT is not well-known & common among Apple users, which is the foreseen reason for those low rates. 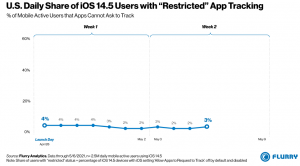 Marketers started to be threatened by fewer imported apps installed in Facebook campaigns since ATT discussion arose. Some companies stopped updating their apps to escape the ATT prompt until they find a way to increase the data again.

Now, Apple has become the target for most mobile companies. One lawsuit has already opened from German advertisers, accusing Apple of “abuse and violation of competition.”

They advocated that Apple is leaving competitors outside via preventing commercially relevant information from being shared.

They stated that the action of Apple was one-sided (final users), and since relevant data were used to give personalized ads, it would take more time for a user to find what he/ she wants and will not see the products they would use.

Apple’s response was an ethical one, underlining that the data is more than a commercial material but something private and needs to be controlled by the owner of that data.

While talking about the tension between the mobile companies and Apple, it is hard not to mention where Facebook stands: 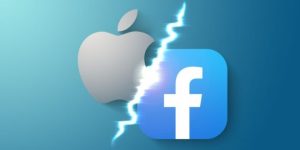 “Free, ad-supported services have been essential to the growth and vitality of the internet; we’re joining others to point out Apple’s hypocrisy and anti-competitive behavior”
Source: https://news.mobilegrowth.org/issues/25.

Meanwhile, in the middle of another case with Epic Games, Apple was accused of monopolizing the app via high cuts from payments & not allowing the app to use redirection to the website.

Apple required all the apps at the App Store to implement ATT starting from the 26th of April, the date of the release.

In addition, they pointed out that the detected apps who try to circumvent ATT and keep selling & customizing ads as it was before, will be removed from the AppStore.

Apple also pointed out that apps that give discounts, extras, or additional hooks to make the user restrict ATT will be banned from the App Store. As obvious it is, Apple shifted the future of mobile marketing from the ground. New legal, sociological, and technical directions will occur and meanwhile, we will be following & sharing them with you.

To be updated about the latest mobile marketing news & our products,  scroll down & subscribe to our newsletter.

We are so excited to announce the latest updates in Appgain automation! They’re designed from your feedbacks and ready for your use! Let’s have a look at what’s new: Multi Notifications Per Messaging Channel For

Google’s New Privacy Attempt For Children Google’s latest announcement was focusing on children’s digital security. They are planning to make an update that will increase age-sensitive ads’ control. According to the announcement, the update will

The previous week, we mentioned Google’s third-party cookie restriction would start in mid-2023 and finish in late 2023. In addition, we summarized important privacy updates from Apple such as email protection, iCloud updates, secure paste,

WANT to get the latest from Appgain?

Subscribe to our blog now & learn how to master everything from user engagement to retention.

Thank you! Your submission has been received!
Oops! Something went wrong while submitting the form.
Back to Blogs